The Art of Hand Lettering

The Art of Hand Lettering is a fabulous archive of hand lettering for logos, signs, murals, stationery, etc. A new site so the examples are only from 2013-2014. A wide range of styles in black and white and full color, all beautiful and mesmerizing. This “Bravo” example is by Neil Secretario and was done  using a Pentel Pigment Ink Brush Pen, which I am ready to run out and buy.

Neil is a freelance designer and letterer in California who specializes in custom lettering, graphic design, and branding. HIs site is a bit of a tease since he includes only sections of nine examples of his work. They are still worth a look.

The newsletter is sometimes a single image but often shows a series of photographs of a work in progress. One series of nine photos from August 2013 shows Bryan Patrick Todd in a cherry picker preparing and painting a very big mural on a very big wall in Louisville, “Our City, Our Home”. A more extensive series of photos is on Bryan’s website.

The branding exercise by Tobias Hall is a mind-boggling example of precision and complexity. There are similar examples on his website. 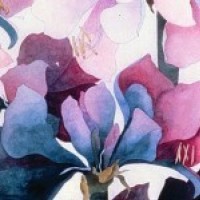